There was a pattern here, wasn’t there, a twisted logic that he couldn’t see. 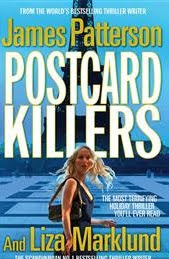 The first time I read the term ‘summer thriller’ I just could assume that it is just the way to make a reference to the ‘most recommended thriller novel’ for the season and then, that there is not other purpose but marketing on it.

I’ve heard about James Patterson many times in the past and finally the summer + thriller equation made their job so I decided to get the book.

Mr. Patterson tells the story of a NYPD detective, Jacob Kanon, who has made a personal statement: to catch the killers of his daughter and son in law.

The murderers have shown previously a pattern about their ‘modus operandi’: to send a postcard before commit the crime, and Kanon still can’t resolve the riddle about such a nasty postal habit. In the meantime, the killers have spent sometime traveling across Europe choosing young couples those that will be methodically robbed after their lives are taken.

“This is the best chance yet… They picked you. So now you’re somebody”.

Finally, Kanon has his lucky day. With the help of Dessie Larsson, a journalist in Stockholm and her contacts, the American detective will complete the puzzle that leads to the end of this personal hunting.

Keep an eye on: the clues given on every chapter, such as places and pieces of art.

At the end of the book I could finally understand the meaning of a ‘summer thriller’: it is a story written in a plain English style that makes the book a fast paced reading novel and can be easily enjoyed whilst traveling on the train, aircraft of coach on your summer holidays trip.

The plot will not be extremely complex, however, it is carefully elaborated and wisely developed.
Finally, I think that ‘summer thrillers’ are a very effective way of captaining new readers which means, the chance to promote literacy among individuals from all ages.