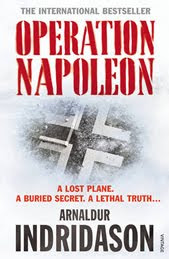 Definitely a great experience!
(That’s the way I wanted to start this post).

Sometimes, we read a book because we have to. During school times we are obliged to pass through thousands of pages that surely we are not interested on, useful nevertheless. In other cases, we read books just for the pleasure of this. But also, there are times where there is that book that we got and began to read without any high expectations and later we will regret the arrival of the last page.

'Operation Napoleon’ represents one of those cases when the author can take you out from the real world and send you to the wonderful experience of a multi-scenery plot where different characters or group of characters are bonded on the quest of some priceless and dangerous secret.

A Nazi bomber aircraft is buried in the snow after crashing in Iceland, turning his fuselage in a metallic tomb for all of its passengers but one who will give his life trying to accomplish his mission perishing swallowed in the snowstorm.

54 years later the capricious glacier will show its old war souvenir activating alarms of some governments those which wouldn’t like that the public may know what was the purpose of that flight from Germany to the US.

I know they’re part of some kind of negotiating team, but what are they negotiating?

Arnaldur Indridason presents to us the quest of Kristin, an Icelandic woman who receives a call from his brother Elias. He is going for an expedition in the same glacier. That call shouldn’t be a thing to be concerned for her unless some others think that call would be a big risk for information leaking. Kristin will need to run for her life at the same time she undertakes a private investigation to find his brother.

Keep an eye on: the very interesting Icelandic point of view about the usage of his land by the US with military purposes; the book is dotted with comments about it.

If you are looking for a novel showing that hidden face of the war, where the good guys and the bad boys shake hands whilst showing a different face to the public, this is the books you were looking for.

Himmler wanted to do a deal with the Allies over fighting the Communists.

No doubt that Indridason knows how to build good international conspiracy plots.