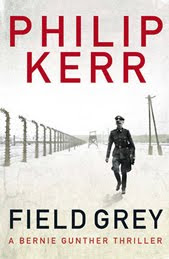 I shan't ever forget a phrase that one of my most appreciated teachers on high school told me: 'the very best thing you get once you are in the bottom, you only can go upwards'.
How many times we use to think that all the bad things have happened to us and there's not fairness life? how many times we have thought that we are under a bad spell?

For Bernie Gunther 'Starting over' is the daily bread. After leave Germany and try to settle his life in the Americas his fate has a sudden twist and he's again in troubles. His honest way of life as a business man is putting asided and he becomes once more a prisoner of war although the war is over. Sometimes the stigma of an SS ex-worker can have more secondary effects than new medicines.

Interrogated over and over, he get used to his new condition: a source of information to catch war criminals at the same time that he's considered as one of them. The argument of: 'I was not one of them, I even wasn't member of the party' is as valid as 'I was just following orders'. Denigrated and isolated from everything becomes a status that he finds quite comfortable.

Philip Kerr shows once more a very charismatic and well built character - Bernie Gunther - who will be our window to the practices of the SS during the WWII and how the members of the party would swear loyalty to an antisemitic Fürher whilst keeping alive and well paid to a very well reputated Jew tailor.

Keep an eye on: the sarcasm that Herr Gunther uses as a permanent catharsis either in a camp surrounded by Russians or whilst jailed in the same cell occupied by Hitler years before.

I´ve read a number of books related with the WWII, but never a masterpiece until 'Field Grey' fell into my hands.