‘I don’t get it. What’s so special about this medallion?’
Hector sighed. ‘Everything.’ 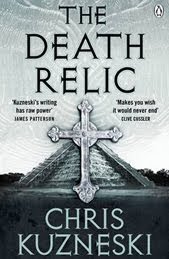 Sometimes we go to cinema looking for an action movie and sometimes we would like sometime softer such as comedy and others we prefer maybe an independent film. Which ever is our choice, we expect that the chosen film will satisfied our needs for entertainment based mostly on our mood.

The same happens to readers when choosing books. When I decided to get and read Kuzneski’s ‘The Death Relic’ I was in a strong need for an action thriller and I know I can’t be dissapointed.

This time, Payne and Jones will have their playground in my beloved country of origin: Mexico. We some action sequences in the ‘Zocalo’ (the main square in Mexico City) and the most of the plot developed in Cancún and Chichén Itzá.

‘And what did you find?’
‘A whole lot of nothing.’

A medallion know as the ‘Death Relic’ will be the bone of contention chased by Mexican mafia, CIA, genuine archaeologists and the famous duo that involuntarely get involved in this turnmoil when received a call from their friend Dr. Maria Pelatti.

Keep an eye on: the historic facts described by Kuzneski, an indisputable proof of how much he documented himself prior the very first line of this novel. The detailed telling of landscapes, buildings, areas an even some recipes (by the way, the recipe of ‘Pico de gallo’ is wrong). The few Mexican characters included in the story are built in the recurrent ways, such as: the hard work head of family who wants the very best for his son, including the wife. The young-entry-level-job guy dreaming with a better life, the general humor of the Mexicans, etc.

‘Mexico is very different than most people think. Mexico is land of beauty, not violence…’

For all Kuzneski’s fans, ‘The Death Relic’ will bring an explosive thriller pack full of fire, bullets, humor and all what an fantastic adventure of Payne and Jones can have along with their faithful friends. Also, I would add that despite the fact of present the current and sadly actual portrait of the police in my country, Mr. Kuzneski also made a good effort to show the nice side of Mexico that invites for some warm holidays full of entertaiment with exotic and scenic places to visit.