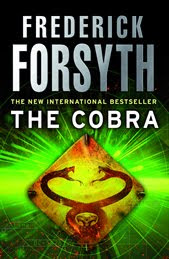 There are many good businesses in the world, some of them legal and some of them not. Food, sports and chocolates for instance. Gambling, alcohol and tobacco as well - morally questionable, of course - and some others even more profitable but inversely honest and acceptable.

Drugs are nowadays one of the most fruitful and ever growing industries along with war technology and sadly appears to be out of control no matter how much technology, people and good intentions are put together to fight against it.

The called him, The Cobra

Continuing with his always successful novels, Frederik Forsyth brings 'The Cobra', a reckless and ruthless agent hired by the US government to find the way to stop with the apparently unbeatable cancer of the drugs. 'The Cobra' will develop an utterly brilliant strategy that will involve delusion, technology, intelligence and a lot of money; but the core of all this deployment is no other than a simple human emotion: fear that will derive in paranoia.

Keep an eye on: the framework prepared by Forsyth that involves, as usual, very well documented scenarios describing distribution routes, Mexican, Colombian, Spanish and Italian cartels and mafias; merchant mechanisms and much more. Pay special attention on the way the human emotions are narrated and the politics side of the story.

Forsyth will never stop amazing me with every book I read. He is by far, the best action and conspiracy writer ever.

'Subject to certain conditions being rigorously fulfilled, the cocaine industry could be destroyed as a narcotic mass-industry.'