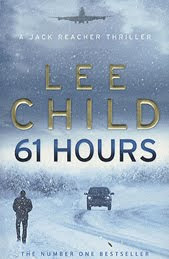 Dozens of times when getting off of the train at Manchester Piccadilly I could see posters advertising a new book from Lee Child and many times I said to myself ‘that’s the next book you must read’.

Finally after so many broken promises I got ’61 Hours’ and I must say that I don’t regret, otherwise, I regreted I haven’t bought some other titles!

Jack Reacher is a passenger of a coach that crashes due to the slipery surface in the raw winter in South Dakota. A chain of little events enclose him in the little town of Bolton. The police department seizes the opportunity to use him as a key to solve a problem: to find out the enigma that involves an old Cold War building nearby and its link with the mafia as the date for the hearing of a witness is approaching.

Reacher will need much more than a good coat to face this challenge. With the little help of the new head of his old job and the local police, he will race against the clock to find a lot more than an old building and some mafia bad guys.

‘Plus, I’m from the army. You mess with me, the next guy you see will be driving a tank.’

Keep an eye on: the profile of Jack Reacher. A very short number of writers like to create characters that mix some sort of bohemian, dirty guy and good-heart fellow. As Jeremy Duns explained previously for simplyreaders, there is not a black or white in this life, it is all a kind of grey scale.

61 Hours, as the title suggests, is a counterclock race and Lee Child knows perfectly how to keeps us tied to the book.