The next twenty-four hours will either be a normal Tuesday or a day which will never be forgotten in the financial capitals of our world... 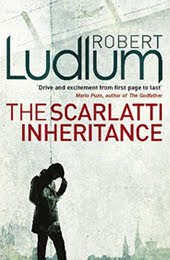 The Scarlatti dynasty is one of the millionare families that kept the American economy steady under challenging circumstances during the II World War, but Ulster Scarlett, the youngest of the three Scarlatti sucessors and national hero, has his own plans for the family’s fortune, and Elizabeth Scarlatti, his mother, will need to do more than scold and punish him in order to stop him.

A very complex conspiracy involving the Nazi Party, the American Goverment, Intelligence agencies, secret organizations and many other entities, runs against the clock to stop the collapse of the American economy, whilst Nazi Germany rises and falls under the control of Hitler and Goebbels.

The quest of power becomes a personal crusade, I think. The more success one has, the more personal it becomes.

Keep an eye on: Ludlum developing the theatrical behavior of his characters, placing a strong emphasis on their emotions. The plot is managed brilliantly across the four separate parts.
The third part develops fastest, whilst the first part is more descriptive and provides the foundations for the rest of story. The last three chapters are full of twists and surprises.

The English, he thought, were wrong  in thinking themselves so civilized. No one was civilized without all-night diners.