They pay millions for defense because they can’t afford to lose the first time. 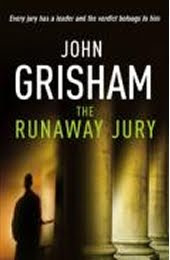 The tobacco industries and their massive and ever-growing profits are under threat when a trial starts at the Biloxi courthouse.

The jurors have been selected and their dirty (tobacco stained) game floats to the surface as the trial goes on. Some jurors become paranoid about being watched, whilst others simply behave oddly as the process continues. Things start to change and the pace picks up as the end of the trial draws near, and at the same time, it seems as if someone unexepcted is hiding important and sensitive information that will be the deciding factor in the final verdict.

My vote’s not for sale, but it can certainly be rented

John Grisham shows the deep underside of the jury, and he presents the tobacco companies pretty well, whilst creating a large amount of evidence that doesn’t just serve to move the plot along, but also to reflect upon the well known consequences of smoking habits.

Keep an eye on: the human weaknesses, the emotions described. The accurate evidence based on scientific and medical research about cancer that supports the story .
This books made me feel like watching a Big Brother TV show, but without all the vanity and superfluous rubbish.